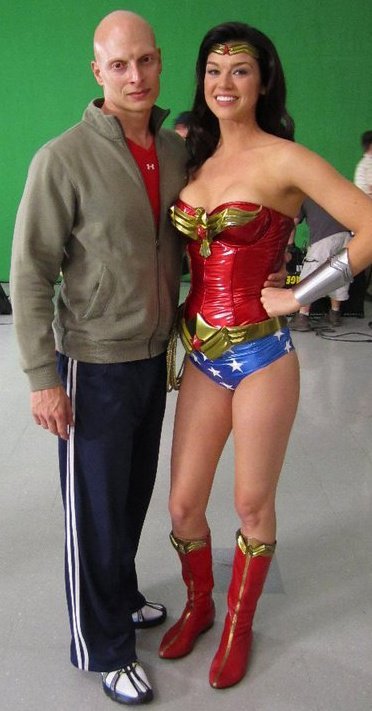 Here you go, true believers. The only photo available (so far?) of Adrianne Palicki in the Wonder Woman shorts.

The show has been yanked by the network (NBC). But not before these photos were leaked by the site WonderWomanTV.com. Interestingly, WonderWomanTV.com pulled down both the post and the original photo seen above – but not before the latter spread everywhere – so you know someone got hauled onto the carpet for that one. Back when the article was first available, they credit somebody named Chris @WonderboyLB for the sneak peek. I guess Chris is in trouble.

Dean at Sprinfield Punx super-Simpson-izes everyone’s favourite DC and Marvel heroes coming to the big and small screen this year.

And he draws Adrianne Palicki with the good Wonder Woman pants.

Read also: “What if….?” Pixar made an X-Babies movie

(via The Nerdy Bird)

Pity Adrianne Palicki. It can’t be easy to chase thieves through midtown in a corset without falling out.

NBC’s new Wonder Woman has a new look – again. Although the corset stays.

The Internet has been humming for the past couple of week since the first photos of Adrianne Palicki in her new head-to-toe Wonder Woman costume were released.

It doesn’t take much to get people riled, but those initial photos sure did whip up some outrage.

Comics Alliance and some site called Bump Shack (?) have a bunch more photos.

This is only the latest “controversy” over Wonder Woman’s costume. Last summer, Jim Lee’s new design of the Amazon princess for J. Michael Straczynski’s retooling of the character caused huge outcry in the comic-verse.

Everyone is excited about Adrianne Palicki as Wonder Woman

TV and comic geeks are drooling over the news that Adrianne Palicki has been cast to star in the pilot of David E. Kelley’s new Wonder Woman series for NBC.

I don’t watch Friday Night Lights and so have no comment on her acting talent. But based on a Google images search for Palicki, she is attractive.

The description of the show sounds a little odd for Wonder Woman.

“The project, from David E. Kelley Prods. and Warner Bros. TV, is a retelling of the DC Comics title in which Wonder Woman (Palicki), a.k.a. Diana Prince, tries to balance her life as a vigilante crime fighter, a successful corporate executive and a modern woman.”

Maybe I’m being cynical, but that sounds a heckuva lot like an 80s action TV series to me – and not in a good way. (For some reason, I’m getting flashbacks of A-Team and Hunter – can you believe that series ran for seven years?)  I fear scenes of scissor-kicks in dark alleys and empty warehouses with danger can lurk in any shadow.

Or maybe it’ll be good.